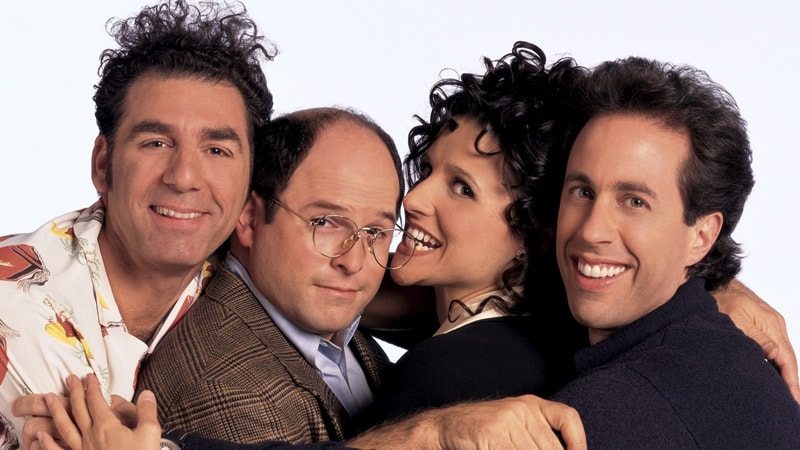 Seinfeld. A show about nothing.

Seinfeld was a sitcom broadcast between 1989 to 1998. It was a massively popular show during its 9 season run and still is. In 2013 it was named the No. 2 Best Written TV Series of All Time by the Writers Guild of America (second only to The Sopranos).

Enter a top 10 best sitcoms search in Google and the majority of publications will almost always feature Seinfeld in their top 5 lists. In the eyes of the shows’ legions of fans, Seinfeld is, without any doubt the best sitcom ever made.

No small achievement for a show that claimed to be about nothing.

Over the years, I’d caught episodes in passing on free-to-air broadcast or when a friend randomly threw on a DVD at their house. I always laughed my ass off, but I didn’t really understand why. It appeared to be funny, so I laughed and enjoyed it.

A month ago, all 9 seasons (169 episodes) were released on my video streaming service. Able to binge on old favourites for the first time, it dawned on me why Seinfeld was considered so laugh-out-loud brilliant and why it’s still deemed a sitcom classic.

The problem with “subtext”

Many writers find the concept of subtext in dialogue horribly confusing. The most experienced storytellers struggle and for the less experienced it can be a nightmare.

It’s not because they can’t write the words. Writing the words is easy.

I put the struggle down to how confusing the word “subtext” is.

For a long time, I thought subtext meant theme. Look up subtext on Google and you get an academic’s definition (one very close to what I was taught as a Communications undergrad) —

Story guru Robert McKee introduces us to the idea of subtext with this doozy.

So what the hell is it really?

Watching so many episodes of Seinfeld has recently helped me come to define “subtext” in a new way.

I’ve decided this — dramatic subtext is the hidden intent of characters expressed in their actions. These can be physical actions or dialogue spoken.

The hidden intent of characters can encompass inner monologue, what isn’t being said, the opposite of what’s being said and in a round-about way the over-arching theme of the text/show.

These hidden intents are shaped by a character’s world view, their needs and deepest desires.

Hidden intents are shaped by a character's world view, their needs and deepest desires. Click To Tweet

When learning how to write dialogue, writing students are taught that scenes are compelling and satisfying to an audience when packed with subtext.

The more subtext, the more interesting and engaging it is. AND dialogue mustn’t be on-the-nose until the climax of a dramatic scene, sequence or act.

This may be sacrilege, but I’m going to alter that teaching using my own definition of what subtext is.

Seinfeld’s writers are masters at this. I’ve picked out a few scenes to show how the idea of hidden intent works.

George is desperate for an extension on his unemployment benefits. He has lied to his unemployment officer, Mrs Sokol, about the frequency of his job application efforts. After a series of lies and some bad luck (via Kramer) he is found out (Vandelay Industries!).

Returning to see Mrs Sokol for another employment review, George escapes the closure of his benefits by feigning interest in her daughter, Carrie.

Mrs Sokol takes his interest in Carrie as a positive reflection on her and lets him off the hook…but now he needs to go on a date with Carrie.

George seems to be winning in his efforts to stay unemployed until the next scene when the situation takes a terrible turn for him.

Throughout these two scenes George never actually says what he really thinks of Carrie even though it’s clear as day he doesn’t like her and worse, is using her to win Mrs Sokol over.

Everything he says to Carrie is for the sole purpose of staying in Mrs Sokol’s good graces and in turn, staying unemployed. He never says what he really thinks about her.

Everything he says in these two scenes are loaded with hidden intent until the climax of the scene in which the dialogue becomes more on-the-nose. “Could you not mention this to your mother?”

Jerry wants to have sex with Marla the virgin. 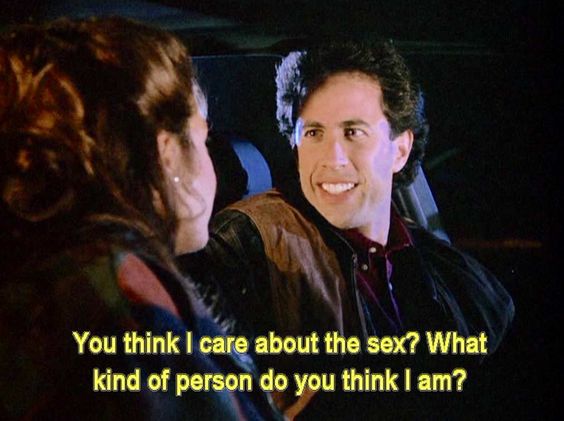 Jerry has agreed to a contest of abstaining from self-gratification with his friends. He’s also dating Marla, a woman who values her virginity.

Jerry is sexually frustrated and desperate for action. While furiously making out in the car with Marla, Jerry hides his sexual desires, even when Marla asks him if it’s okay they don’t do it.

While the scene doesn’t build up to on-the-nose dialogue, Jerry’s hidden intent is clear to the audience — to have sex with Marla.

What makes the scene so compelling is that he never says it out loud and actually denies it to her face!

Jerry, George and Elaine visit a newly opened soup stand where the owner is referred to as the Soup Nazi due to his explosive temperament and strict soup ordering protocols.

Elaine doesn’t take the rules seriously and is swiftly banished by the Soup Nazi.

Through a hilarious turn of events, Elaine is given an armoire by Kramer that contains the Soup Nazi’s secret recipes.

In the climax of this episode, Elaine goes down to the Soup Nazi’s kitchen to bust up his operation.

It’s a really short scene but shows how hidden intent and build up to on-the-nose dialogue really works.

Elaine doesn’t burst through the door to let the Soup Nazi know he’s finished. She plays with him and hides her intent to destroy him just for a little bit…before hitting the nail on the head.

Seinfeld. The show that only looked like it was about nothing.

In daily life, people say yes but it can mean no. When people say they want something, they can mean they don’t want it.

People can say they want to visit the cinema but in actuality want to eat at the local Chinese restaurant.

The words spoken from our mouths can have double, triple or even quadruple meanings.

The words spoken from our mouths can have double, triple or even quadruple meanings. Click To Tweet

What we say and how we say it is motivated by what we want and the potentially dysfunctional ways in which we go about getting what we want.

Seinfeld has always claimed to be a show about nothing, but I think this is untrue.

While appearing to be completely random, it’s really about human foibles. How humans behave when they want things but don’t know how to get them. The laugh-out-loud pitfalls of human dysfunction.

During its 9 season run, Seinfeld put a microscope on the pettiest, silliest and most foolish human behaviours and succeeded. It mirrored our hidden intents so well we could see ourselves in the show’s characters.

It showed us our stupidities without pissing us off, and even better, had us rolling on the floor, crying with laughter.

That isn’t nothing. That’s really something.

Are you a fan of Seinfeld? Are you a writer who struggles with subtext in dialogue? I’d love to know what you think.

Feel free to leave your thoughts below. If you enjoyed this article, don’t forget to share it with your friends!