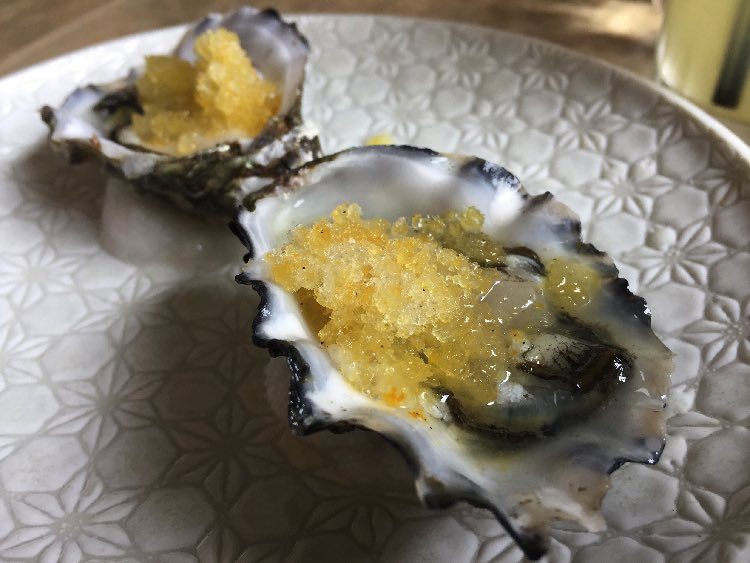 Lucky Suzie isn’t completely Malaysian and it’s not entirely Japanese either. It’s not quite fusion because…well, it just isn’t.

On Lucky Suzie’s website they claim to be a little cheeky, a little flirty and a whole lot of fun. The coupling of Malaysian and Japanese comfort foods is exactly that. Fun for your taste buds.

Zachary Tan (Devon) opened Lucky Suzie in March 2016. The rave reviews have been endless. Being fans of Zachary’s work at Devon, my family and I had to give this place a try — finally, we made it. 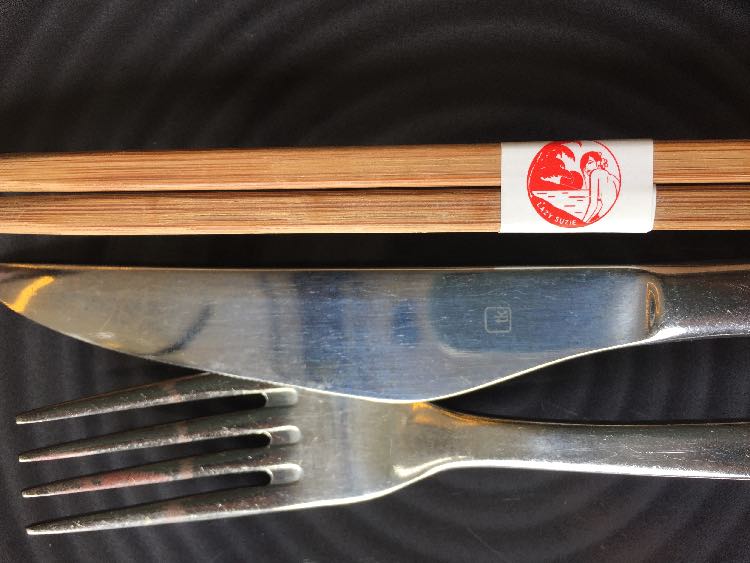 Lucky Suzie didn’t disappoint. Every dish was delicious, living up to what we’ve come to expect from Zachary and his crew.

From a distance, Malaysian and Japanese may seem a strange coupling. Malaysian flavours usually hammer the tongue. Lots of spice, lots of salt. Japanese flavours go in the other direction. The use of fresh ingredients place emphasis on subtler flavours.

Zachary’s passion and skill honours dishes from both cultures — while adding his own hint of pizazz. My guess is, Zachary just loves this kind of food. He loves eating it and loves making it — which is good for all of us as customers.

Interestingly, Lucky Suzie started out as Lazy Suzie. Zachary Tan rebranded when he was hit with a legal infringement notice from Lazy Susan’s Comedy Den in Brisbane.

It’s kinda bizarre because live comedy has zero to do with food. But it is what it is… and yes, it’s off topic but I just wanted to share that fun little fact.

Now on with the show!

Pacific oysters (with shiso granita) – $4 each

The meal started off with these fine little delicacies. The Pacific oysters weren’t too big or small, making them the perfect size for a single delicate mouthful. The oysters were outstandingly fresh. Lucky Suzie’s shiso granita, with its gentle tang, complimented the creamy, buttery flavour of the oysters. A fantastic way to start the meal. 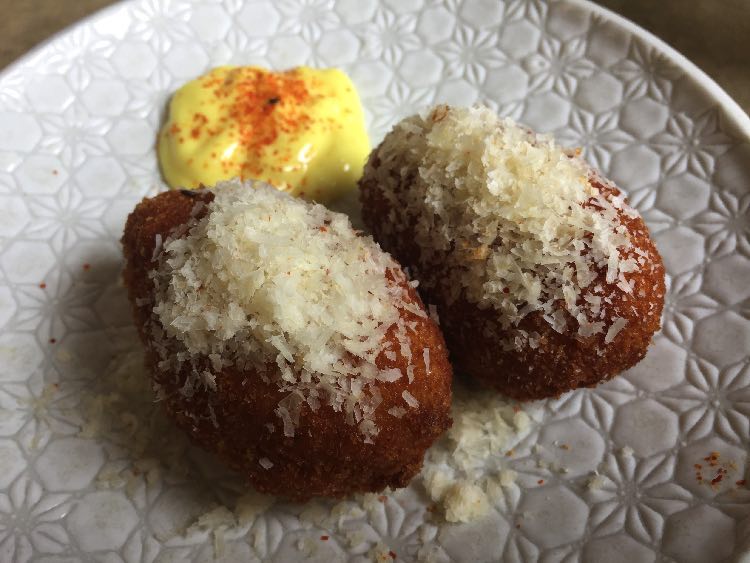 Fresh out of the deep fryer, Lucky Suzie’s crab croquettes arrived piping hot. Biting into them gave off the most satisfying sound as the crispy panko cracked apart! The sweet aroma of blue swimmer crab mixed with potato, a touch of togarashi and Grana Padano exploded our taste buds. Yes!

And I thought that you could only get good ebi katsu sandos in Japan! As per Japanese tradition, Lucky Suzie’s ebi katsu sando was served on two slices of plain white bread. With the crusts cut off just to be cute. But don’t let this part of the sandwich turn you away. Because damn! 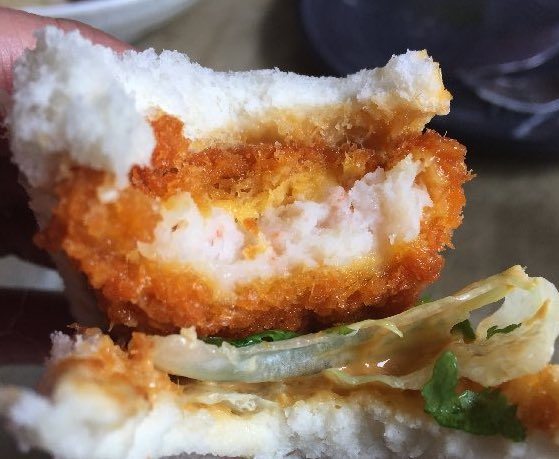 The crumbed prawn cake in the middle was deliciously awesome. Ultra crispy on the outside, but juicy, tender and sweet on the inside. The prawn mince was perfectly seasoned and tender to the bite. I could eat this every day. 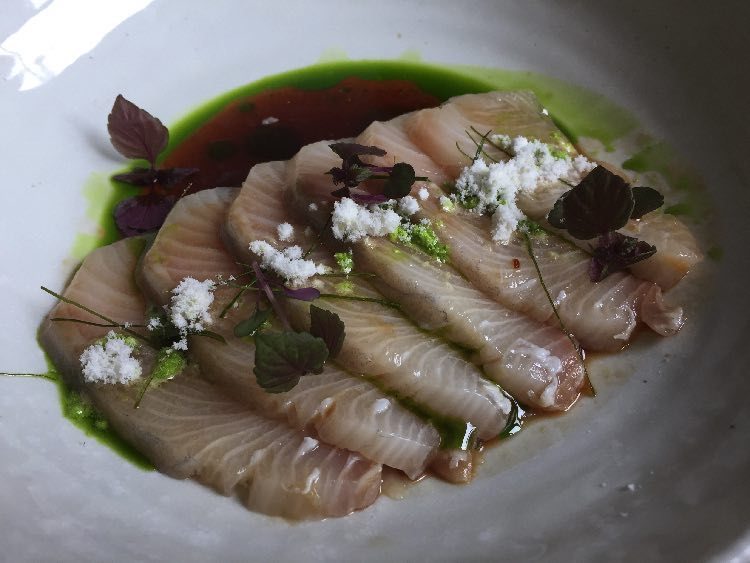 The kingfish tasted like it was right out of the sea, worthy of sashimi. Fabulous presentation. The fish had a fantastic body to the bite. The citrus soy and kaffir lime dressing skyrocketed this kingfish into the flavour thermosphere. Nice work Lucky Suzie!

When a restaurant goes to the effort of sourcing premium ingredients, we notice. 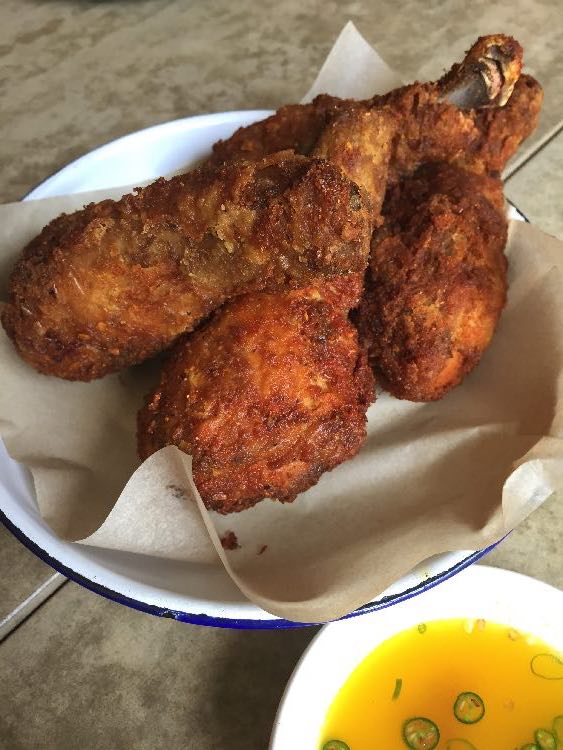 If you like your deep fried chicken, you’re going to love Lucky Suzie’s version. A light batter coats the drumsticks and sinking your teeth into them gives you a touch of crunch. The tender, juicy flavour of the chicken then kickstarts a party in your mouth! The spicy dressing made of shrimp paste and Lucky Suzie’s “secret ninja” herbs and spices were also kick ass. 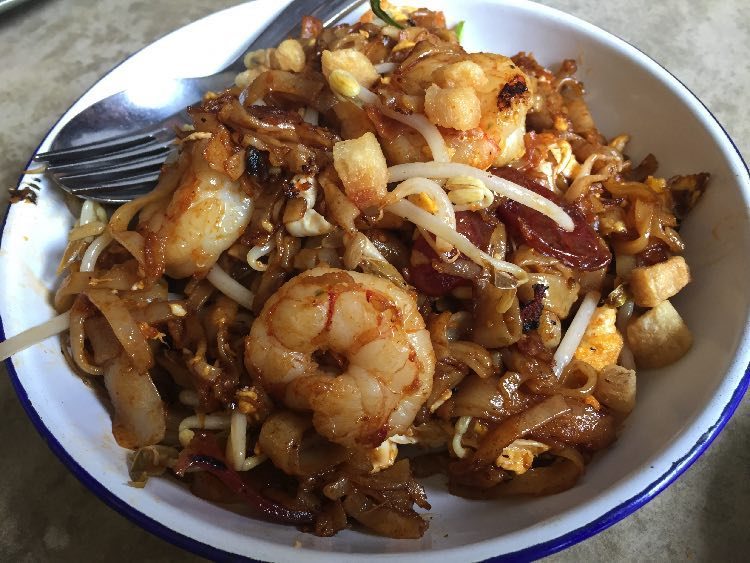 This is the one dish I struggled with throughout the meal. And it’s not because it wasn’t good. It was perfectly wok tossed just like the Char Kway Teow I’ve eaten in Malaysia and Singapore. There was a generous amount of lup cheong (Chinese pork sausage) and fried egg tossed through the rice hor fun noodles. A few fresh prawns were thrown on top too, which I loved.

The Char Kway Teow was smoky and flavourful with plenty of what the Chinese call “the breath of the wok” (wok hei). But in the end it was a little too spicy for my personal taste. My mouth felt like it was on fire.

This is no fault of Lucky Suzie’s and next time, we’re ordering extra mild! 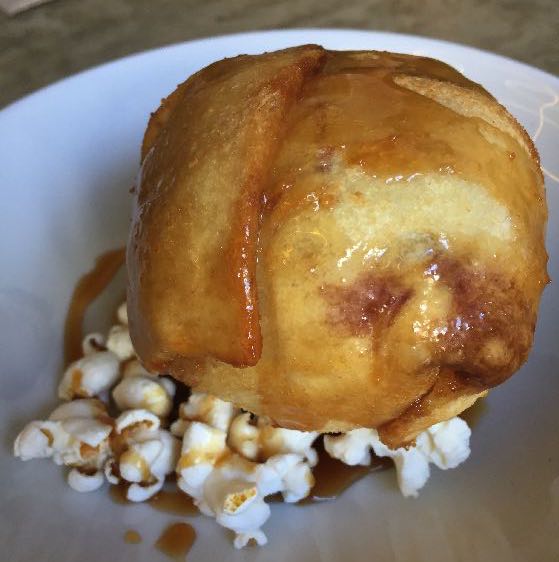 Fried ice cream is usually the joke of Asian desserts. The laugh riot at a Chinese restaurant. Usually, a lump of vanilla ice cream is covered in stale white bread, then frozen rock solid. When ordered, it’s yanked from the freezer to be deep fried. Deep fried just enough so the stale white bread turns golden but the ice cream doesn’t melt.

Lucky Suzie appears to be using the same technique of freezing and deep frying — but they’ve pimped the hell out of it. They’re using top ingredients, annihilating the archaic 70s Chinese restaurant recipe. 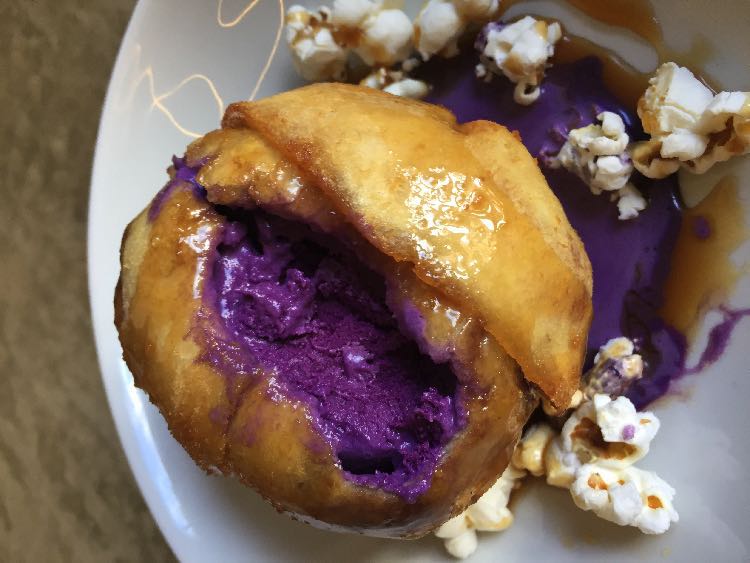 Gone is the Paul’s vanilla ice cream (no offense to Paul’s lovers). It’s been replaced with a delectable ice cream made from taro (an aromatic Asian root vegetable that turns a darker purple when you cook it). Silky to the tongue, bright and beautiful, the taro ice cream left me wanting more. The salted caramel and rye bourbon sauce perfectly complimented the ice cream. Little bits of popcorn added crunch to each mouthful. 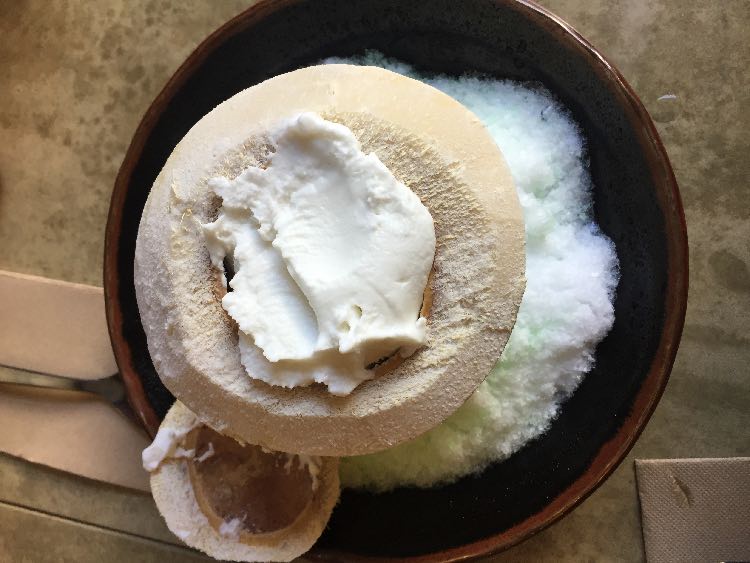 On arrival, this looked kinda ordinary. Big old coconut, sitting on a plate of shaved ice. But this turned out to be my favourite dish of the day…because I’m coconut obsessed. 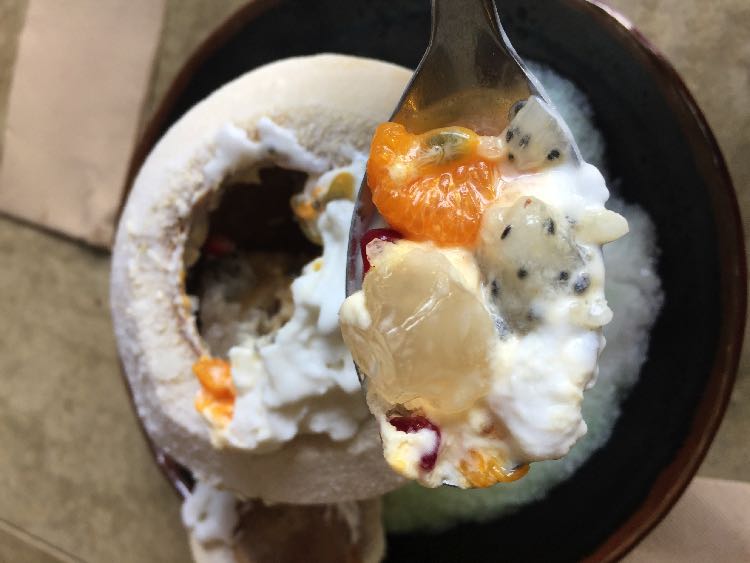 Inside a real coconut shell was everything gloriously coconutty. Coconut ice cream made from coconut milk. Coconut sorbet made from coconut juice. Young coconut jelly accompanied by little bits of dragon fruit, baby mandarin wedges and pomegranate. A little sweet, a little tangy and all out coconutty! An awesome way to finish off a delicious meal.

Is Lucky Suzie worth the visit? 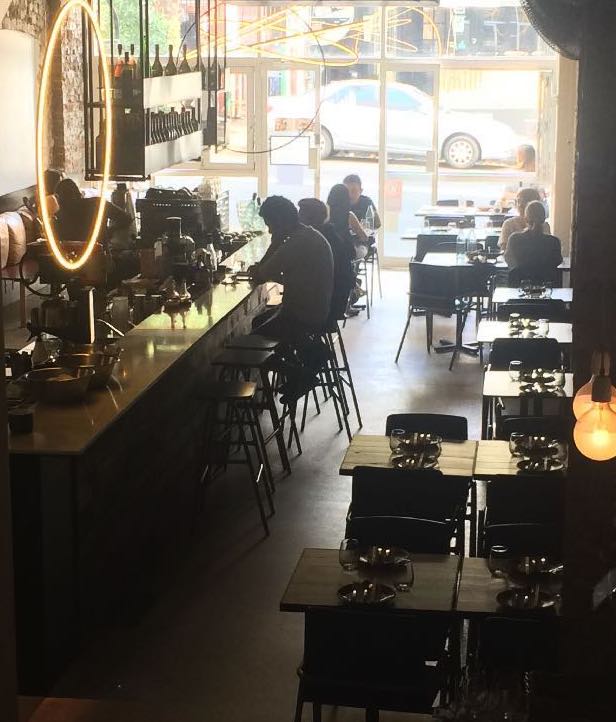 Hell yeah! As expressed already, the food is awesome. The service was friendly and professional and the restaurant had a nice ambience. Overall, we were very well looked after and we’ll be back as soon as possible.

We had a fantastic time at Lucky Suzie and I have zero hesitation in recommending this fine establishment. Get in there and chomp up that chicken!

For more information about the location and opening hours check out the Lucky Suzie website.